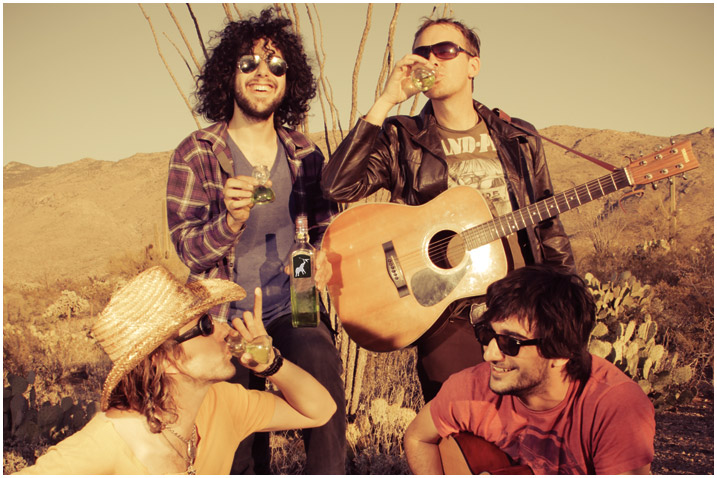 Remember that song “Scotty Doesn’t Know” from the Euro-Trip movie? That good-times, hard-rocking, hooky anthem that rattled around in your head as you exited the theater. Now… imagine that song was an entire band and that vibe was embodied and personified in that band. Well…good news…that band is the LA based quartet Native June. Led by the affable and engaging lead singer and songwriter Gabe Watson, Native June belts out Saturday night party anthems with greater ease than the average American works an all-you-can eat buffet… which is to say… VERY easily. Watson is a very accomplished songwriter who knows his craft well and has a McCartney-esque likability that is unmistakable and contains the essence of the rock-n-roll spirit circa 2012.

When watching Native June you may not even be aware of the Perma-smile that your face gets locked into as you find yourself lost in the pure joy of watching this pop-punk ensemble thrash through their set with the furious zealotry of an Evangelical revival in the backwoods of the Bible Belt on a summer night. The difference with Native June is that their religion is good old fashioned American Rock-N-Roll and Watson along with his band mates are among it’s greatest contemporary disciples.

Joining Watson on this turbo charged sonic quest for glory is the equally charismatic Tristan Hendy who handles bass duties like a Rock God on loan…well… from God. This dude can give Leif Garret a run for his money when it comes to the sheer exuberance and presence that he injects into Native June’s blistering live performances. Watson and Hendy also have Lennon and McCartney-at-the-Cavern-Club type of slapstick interplay that demonstrates the strong bond the two share as friends and band mates.

On lead guitar duties is Martial Chaput, an LA transplant from some part of France but you’d never know it by the way he plays. He is all guts and glory. This ain’t no-cheese-eating-surrender monkey as evidenced by the way he completely tears it up on his SG. Martial serves these songs incredibly effectively and is consummate and proficient in his playing and is a joy to watch. Holding it down with a killer backbeat is the understated powerhouse Michael Brown providing the perfect driving rhythm for these Hell-bound rabble rousers as they do their thing.

The only activity more fun than watching Native June on stage, as I can attest, is hanging with them off stage. They are 4 of the most fun loving lads to be around and life is just one big dirty joke when they are not tending to the serious business of schooling every other band on just how its done. Stand out tracks from Native June include: Summertown, Saturday Night, Daisy, The Circus and Japan.

Check them out at nativejune.com