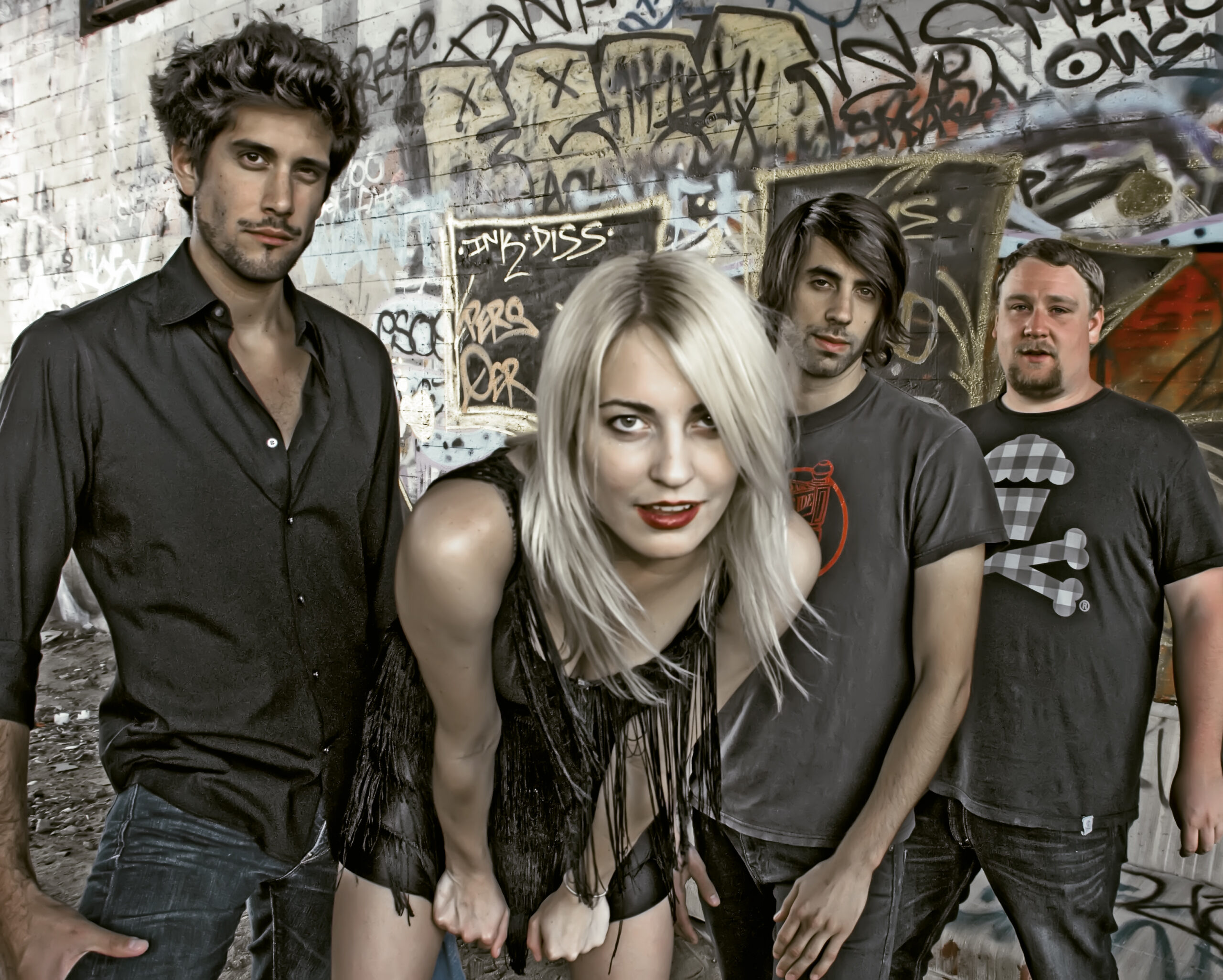 Let’s suppose you’re in a band… a hard-rockin, shit-kickin, take-no-prisoners band. Let’s also suppose you are from Los Angeles, you play the Sunset Strip circuit frequently and you fancy yourself somewhat of a sexy, good-looking female lead singer of said hard-rockin, shit-kickin, take-no-prisoners band. Let’s suppose a bit further that your band finds itself on a bill with Queen Caveat. My best advice to you is find some excuse to cancel the gig, stay home, have a big cheeseburger and curl up with a good book….cause if you are insane enough to go up against Queen Caveat on their home turf, you are out of your mind.

Queen Caveat will utterly and completely destroy you and any sense of self esteem you may have! Queen Caveat is the real deal.
Fronted by the insanely sexy and fearless Lauren Little, Queen Caveat delivers a power kick straight to your gut.
Their music is an adrenaline shot direct to your jugular vein. Lauren performs her relentless set as though she is exorcising a demon that may or may not actually be exorcisable. She is a grenade inside a crate of dynamite surrounded by a fleet of gasoline tankers…and like a sly vixen, she is there taunting you with a book of matches. She is an erupting volcano while mushroom clouds rise around her for show.
Lauren is a star and Queen Caveat is where she shines. These guys will rock the snot out of your nose and leave you bleeding and you will thank them for it.
With a seemingly bottomless pit of energy, Queen Caveat’s live show is a powerchord journey in to the black heart of the universe. They will take you with them willingly and bring you back with blisters on your ears. Just when it seems this band can’t rock any harder they show you that they were just warming up. Think about that part of Boston’s “More Than a Feeling” when the singer starts singing higher and higher until the point his vocals reach the outer limits of the stratosphere as you ask yourself how this is even possible? This is what Queen Caveat does.

“What Built Me”, “Bullet” and “Let It Fall” are just three of their stand out tracks that shouldn’t be missed. Neither should their live show.

Queen Caveat does things that can’t be taught, bought or learned from anyone. If you are thinking of a career in hard rock I hope you know Microsoft Office well, cause if you are competing with the likes of Lauren Little and Queen Caveat, you will need these skills as you seek employment as an administrative assistant as you fade in to obscurity cursing Queen Caveat for destroying your chances. They are just that damn good.