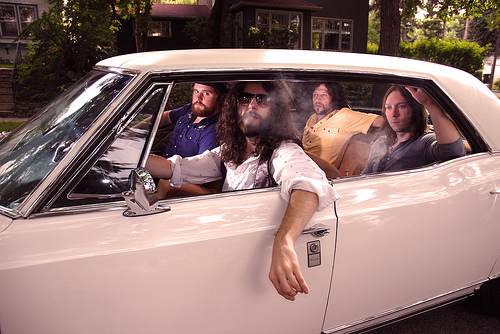 Ahhh… The Sheepdogs….where to begin…? In watching these dudes at an outdoor SXSW event last week, I’m not sure what I was struck by first. The sheer height of the 3 non-drummers standing on stage like hippy centurions guarding the portal to another dimension… a dimension where classic Southern Rock reigns supreme and pungent herb wafts endlessly through the arid air. Or perhaps I was in suspended animation and suddenly saw myself leading a band of Outlaw bikers at top speed….helmetless…. down a sunny highway in British Columbia to rendezvous with our mules to pick up 80 pounds of Humboldt County’s finest weed for distribution all over Canada’s mid-west. A joint in my mouth, a bowie knife in my sheath and my hair blowing in the wind as I ride, one-handed, holding on to my ape hanger handlebars.

Well…whatever it was…The Sheepdogs definitely made an impression on me and have at least 2 primary capabilities that they execute to a very high degree…. they will get you high without even trying and they will rock your balls off with old school, Mussel Shoals-infused Southern Rock.

Now… take the whole Rolling Stone cover backstory off the table for a minute and the entire come-from-behind heroism of The Sheepdogs….there is no doubt that they were doing what they do long before Rolling Stone anointed them the only unsigned band ever to win the coveted RS Cover Contest and will inevitably be doing this long after the sun sets. Though I suspect that the proficiency with which they represent their genre, that sun won’t be setting anytime soon.

With killer songs like, “I Don’t Know”, “The One You Belong To” and “Right On”, those of us who grew up listening to bands like The Black Crowes interpreting their version of Lynryd Skynryd-influenced rock-n-roll , we now get the chance to live it all over again in real time through The Sheepdogs.

Any way you slice it…. The Sheepdogs are the real deal. They have surely bucked many trends in music to stay true to that which is really the most familiar form of American rock brought to us whole heartedly by our friends from up north.

The low end of Ryan Gullen’s Rickenbacker bass thumped in my chest as lead singer Ewan Currie belted out ganga stained insta-classics and traded guitar licks with lead guitarist Leot Hanson as drummer extraordinaire Sam Corbett held it all together with a masterful display of classic rock percussive genius.

In having the opportunity to hang with the band for a while after their Victory lap set, I was taken by how down-to-earth all the members were. 4 chill dudes, happy to be where they are and glad to know you. Though having never met them before, our conversation revealed to me a genuineness and a great appreciation for their fans and for the opportunities that are before them. With this combination of modesty, mastery and reefer, ain’t no way they can fail. The Sheepdogs can get me high any time !